GETTING TO KNOW THE NEW LCS EXCO

The Lutheran Church in Singapore in its Annual General Meeting on 22 May 2021 has elected a new slate of ExCo members who were installed on 26 June 2021. They are pleased to introduce themselves to you and send their warm greetings!

In 2021, The Right Revd Lu Guan Hoe succeeded Bishop Terry Kee as the third bishop of the Lutheran Church in Singapore. He was ordained in 1992 and served as Pastor-in-charge of several Lutheran congregations for the last 30 years. He actively serves in the Four Denominations Chinese Work Executive Council for more than ten years, bringing together Chinese Christians to fulfil the Great Commission. He is an alumnus of Trinity Theological College and Lutheran Theological Seminary in Hong Kong. He is married to Grace, and they have two daughters. Rev Dr Samuel Wang was ordained in 2011. When the Lord called him through the ministry of Rev John Nelson, missionary pastor of a few Lutheran congregations, he was still young and it was much later that he confirmed the call. He was baptised as an infant in Lutheran Church of Our Redeemer by the same pastor, then joined his parents at Bedok Lutheran Church, growing up there. He has pastored two Lutheran congregations before LCS send him overseas as a faculty-in-development of Trinity Theological College (TTC). Currently, he lectures in Theology, the Lutheran Confessions and Martin Luther’s Theology and oversees the field education training of students. His wife, Caroline and four daughters like to have meals together, and they chat over the dinner table. He wants to play chess more frequently, enjoy a day out to cycle, stroll among nature, and sometimes stay home and read. Peter Seow’s calling and gift had always been in administration; he works in many multinational companies in human resource management and financial administration. When Bedok Lutheran Church’s pastor, Rev John Nelson, asked him to work as an Administrator in the 1990s, he did not refuse. This work eventually also means that he manages the Childcare and Kindergarten as chairperson, and he was also the treasurer of the Lutheran Church in Malaysia and Singapore (LCMS). He suffered from kidney failure and in 2009 had his second transplant operation, that is when he decided to take a break from work to recuperate. When he feels much more robust, he went back to work in 2010 and shortly joined Lutheran Community Care Services (LCCS), working as the Finance/Human Resource/Administration manager when Rev Daniel Ang asked him to help. He retired in 2020 to look after his aged parents. He is married to Helen Tan, and they have a daughter, Hazel. He likes to cook and create new dishes for his wife. He also loves travelling on holidays and watch comedy to de-stress from overwork. Baptised at 13 in Ling Liang Chinese Church, Kolkata, Rev Richard Chiu grew up in India. He eventually taught in the lower primary level at the church school for three years before going to Singapore Bible College (SBC). Pastor Richard met his wife, Priscilla Lian, who was also studying in SBC at that time. In 2002, after graduating from SBC, they got married in Lutheran Church of Our Redeemer (LCOR) and returned to serve in India. In May 2005, he returned to minister at LCOR as a parish worker and was subsequently called and ordained in 2011. He has been serving in Yishun Christian Church (Lutheran) together with Rev Soh Guan Kheng since 2012. Pastor Richard loves Luther’s Small Catechism. His favourite Lutheran hymn is, “Lord, Keep Us Steadfast in Your Word.” For leisure, he loves to swim and takes long walks. He has two teenagers, Abigail and Jethro. First elected in 2019 to the LCS ExCo, Michael Yuen was appointed to form and chair the LCS Community Outreach Standing Committee. He was baptised in Queenstown Lutheran Church by the Rev Noel Anderson in 1981 and has served as the Chairman of the Combined Council since 2017. He is a CG leader and serves in the Church Disciple-making, Worship and CG Committees as well.

Michael is not particular about food but loves rock oysters and sashimi. He enjoys reading and is a fan of John Stott and Edmund Chan, always bearing in mind Rev Edmund’s exhortation that “You can’t walk with God while holding hands with the devil”. He appreciates both hymns and contemporary worship songs. Married to Michelle, they have two young adult children, Angela and Aaron. Figure 6. Michael’s CG throwing a surprise birthday buffet lunch for him. He is pictured with his family in the centre row photos.

An accountant by training, Albert was baptised in the Lord in 1994 and served at Christian National’s Evangelism (CNEC) in the treasury function for six years. He had been a member of the Assemblies of God for seven years and fourteen years with Yishun Christian Church (Lutheran) and Lutheran Church of Our Redeemer together with his family. Albert serves God as the Chinese lay representative and LCS Missions Standing Committee treasurer appointed by the LCS ExCo. He loves nature and enjoys taking strolls at the scenic Botanical Gardens or the other nature parks dotted all over Singapore. Rev Eric Chan graduated from Trinity Theological College (TTC), in 2004 and the ExCo assigned him to Lutheran Church of Our Redeemer (LCOR) and later ordained in 2010. During the first four years, he was mainly responsible for the elderly and community care ministries; and later, he worked with the youths. After ten years, LCS sent him to study at the Lutheran Theological Seminary (LTS) in Hong Kong, and Pastor Eric graduated with a MA in Diakonia in 2015. After graduation, he continued to serve in LCOR and is the Pastor-in-charge since mid-2016. He is married to Cheong Kah Ping, who works as an HR senior manager. They have three teenage children: Enoch, Jolene,  and Josiah. His favourite exercise is swimming, and during his rest day, he will immerse himself in cooking; he also enjoys bringing his family overseas for a holiday. ILSM INTERNATIONAL LUTHERAN SEAFARERS’ MISSION The International Lutheran Seafarers’ Mission in Singapore has been in existence for many years, founded in December 1999 and is an affiliate of the Lutheran Church in Singapore and the [...] 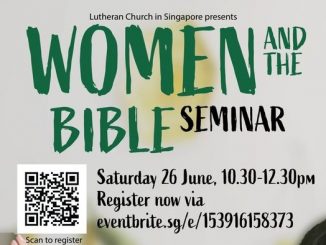